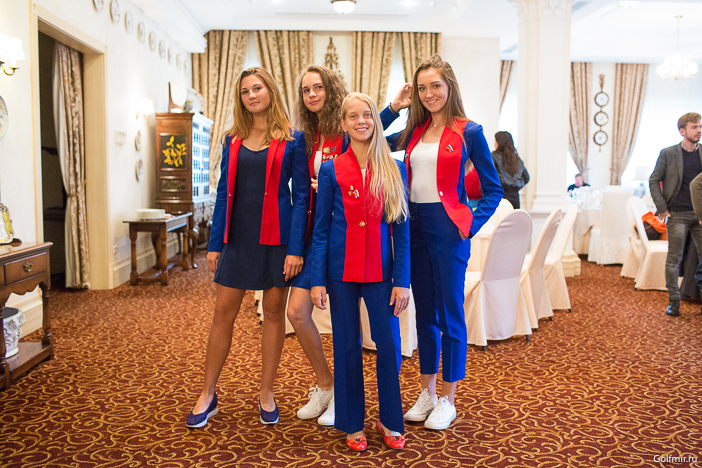 The Dream Team golf project was created by the Russian Golf Association with the active participation of its president, Viktor Khristenko. The direct training of young golfers is led by Dmitry Zakharov, who is assisted by physical training coach Manvel Dunn.

“Dream Team” is one of the main projects of the Association, which is an incubator of future high-class golfers. Even now, at the age of 14/16, team members can show a negative score and take prizes on the podiums of international tournaments.

Obviously, golf management is focusing on the younger generation, making sure to keep in mind the mainstream golfers in the adult category. There are many different opinions about the project, but it should be noted that the competition for getting into the lineup remains high.

It is interesting to watch the young applicants play for entering the main team. The guys play smoothly, rarely making mistakes. Obviously, hitting length and experience may be lacking, but it is a matter of time and training.

The composition of the Team for the 2018 season is currently being determined, meanwhile, the winners of the AGR President’s Cup in early September are: Ekaterina Malakhova, Natalia Guseva, Alexey Butchart and Ivan Striganov.

Unfortunately, within the framework of the last tournament, there were no negative accounts – according to the participants and support groups, the weather conditions and the length of the Pestovo golf course affected.

It is interesting that despite the victory, Natalya Guseva commented on her result:

“To be honest, I’m not very happy: I’m tired and want to rest. Now I am preparing for competitions in Austria, which is why I am not going to the Russian Cup. This golf tournament was unsuccessful for me, for three days the game did not work out for me. What to do? We will continue to prepare and hope that we will please with our results. “

Katya Malakhova, who showed the best score for three days of the tournament among women (+13), was elated and positively spoke about her result:

“I am very glad that I won this tournament and especially the trip to Malaga. The autumn weather let us down, as it often happens in Moscow, but I’m used to playing in such conditions. I have won the second tournament in a row, I have become much more confident in my abilities. I really hope that I will win the 2017 Russian Cup. “

Most of the young golfers who are now showing good results are wards of Dmitry Zakharov, who has been managing the training processes of the project for the second year.

GM: Dmitry, how do you assess the Dream Team project from a coaching point of view?

D.Z .: “It seems to me that for the first time in modern history it was possible to build a competent training system.

In principle, since February of this year, the participants have been working on themselves qualitatively: we started with training camps in Spain in February and March, and continued in April. Then there was a series of international tournaments: Championship of Finland, Championship of Belgium.

These were our preparatory tournaments for the U16 European Championship, which took place at the end of July in Norway. Our team showed the best results in the history of Russian golf there: Katya Malakhova entered the top ten in the individual standings, the team as a whole took 14th place out of 28 teams.

It is worth noting that the 14th place may not be very impressive, but we still managed to bypass such countries as Austria, Belgium, Sweden, Scotland, in which golf, of course, is much better developed. In the same Sweden, thousands of juniors are training against our hundred, so the result is obvious.

There were a lot of accounts below a couple, such results were not more than in the last 5-7 years combined. This is encouraging.

Our girls show themselves very well. Natalya Guseva is the leader of our team, which won the Championship in Finland, having played at -5, took the second place in Belgium, having played at -4 in three rounds, and in general looked good for the season.

In general, the team is progressing and showing good results. For example, Alisa Khokhlova played -7 in the Russian championship, also a great score.

Katya Malakhova played in – 5 in Rostov, in general, there was a lot of hope this season. “

GM: What’s next for the team?

D.Z .: “Next year we will continue to prepare according to the worked out plan, and we will also play in international competitions.

Our main guys will try to get into the international amateur rating, so that they can possibly compete at the 2018 Junior Olympics in Argentina.

And still our main goal is to participate in the European Young Masters tournament, which will be held in Norway again. “

GM: Is the team already decided?

D.Z .: The Dream Team, in principle, was determined at the last golf tournament, the list will be announced a little later. There will be 90 percent of the same guys, maybe there will be two newcomers, but the final line-up will be known later. “

According to the Russian Golf Association,increasing the number of golfers is 10-15% per year. This is a good pace, especially despite the difficult economic conditions in the country.

Of course, golf is an attribute of a successful person who, in times of crisis, can find an opportunity not only to play golf, but also to increase his assets. People began to invest more in themselves, in their education and hobbies – this is a common accompanying fact of a time of crisis.

The success of the Dream Team is one of the results of the work of the Russian Golf Association under the leadership of Viktor Khristenko, who is always personally present at the awards ceremony for the AGR President’s Cup, and also invests certain resources in this project.

READ  A dentist is a specialist who prolongs life for decades

GM: Victor, what can you say about the results of the Dream Teams project?

V.Kh .: “One could only dream of such results that the guys showed this year.

One of the main tasks for the near future is participation in the European Young Masters 2010-2020, which is extremely important for us. I would like the juniors themselves to want to play so that others begin to dream about it, not only those 32 people who go to the final stages of selection, but also those who are growing up and those who have nothing to do with golf at all. …

The success of the team should be a dream for the rest!

This season, in my opinion, has been very successful. The golfers justified all the efforts and funds spent on preparation: they withstood the highly complicated competition calendar of the season, showed record results that adult athletes can envy.

Playing so many rounds below the pair is a very good result. When you hear the results at -5, at -7, you literally freeze in amazement, your jaw falls off, you don’t know how to react to it. And the first thought that arises is “Maybe someone made a mistake ?! It’s true?!”. (laughs)

The growth of the guys in skill is phenomenal, I noticed that they are “charged” for the result, for the game. Absolutely professional sporting behavior despite junior status. ”

I think that the coaches, if we talk about this age cohort, “have grown wings.”

Dmitry Zakharov and Manvel Dunn did a great job.

Moreover, it is pleasant that now not only Muscovites, but also young golfers from other cities are steadily among the best. “

GM: Is there any known Academy where the juniors will go on the grant?

V.Kh .: “After talking with the coaching staff, I think that we have no reason to change the academy. We are adhering to the training plan at the Jason Floyd Academy in Spain.

Now it is necessary to choose the most successful time period for the children and for the academy. Most likely, we will choose February, March – two sessions. We will collect 12, and maybe 14 juniors for the first stage, and in the second stage we will select the top eight based on the results of the first session. “

READ  Golf on an island in the Caribbean: getaway on the golf courses of Barbados

One of the questions that often arose among the golf community was the wide geography of the tournaments.

Not always young golfers, as well as adult amateurs and professionals, can travel around Russia following the main golf competitions, which affects the number of participants and their composition. Viktor Khristenko commented on this issue:

V.Kh .: “Many tournaments are held in Kazan, in St. Petersburg. Of course, Moscow and the Moscow region are significant, but they should not remain the only ones.

If we were limited to the development of sports only in Moscow, then we would never have successful athletes, for example, as happened in hockey, where we see many schools and stars appeared in the regions of Russia.

It’s the same in golf: a lot of talented guys who don’t have the opportunity to play many tournaments. We, as the Golf Association, provide them with this opportunity, we cover a significant part of the costs, of course with the support of our partners and sponsors.

Speaking of travel time, sometimes it is faster to get to the regions than to get somewhere in traffic jams in Moscow,“- summed up Viktor Khristenko.