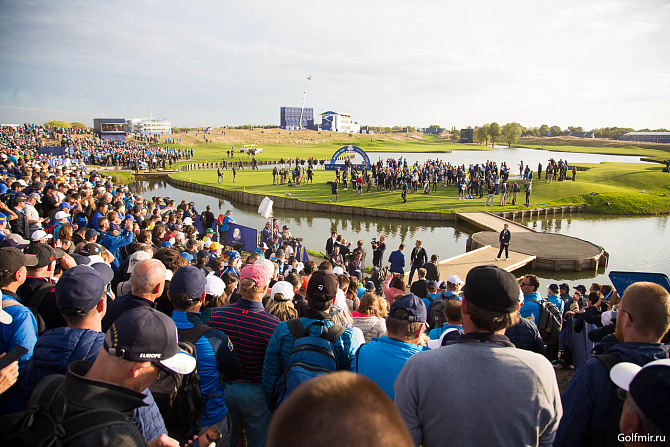 If you ask to describe Ryder Cup 2018 in one word, that word will be “scale”. For the second time in history, the stars of European and American golf fought for the title of the strongest on the territory of continental Europe, and it was huge!

The organization of the golf tournament was excellent. 270,000 spectators from 90 countries attended the tournament, with the opportunity to watch the players on Tuesday during the practice rounds.

By the way, in our opinion, the fact that “it all started” already on Tuesday affected the result of the US team – golfers were tired after playing overseas and a long flight.

In the last two days, Tiger smiled little and was not as welcoming as in the first days of the tournament. At the “losing team’s” press conference, he openly slept or looked at the table.

To get to the Ryder Cup, it was necessary to park in numerous parking lots with a capacity of 34,000 cars or use 270 buses that took people to the gates of the golf club.

The event was organized by a young but very experienced team of the European Tour.

It was very interesting to watch the well-coordinated work: with the help of one and a half thousand marshals and volunteers, the organizers skillfully distributed the flows of journalists, spectators and teams to the right channels so that everyone was satisfied.

Golfers crossed a specially equipped bridge from the training zone to the playing area, where they were greeted by thousands of people with a set of chants invented during the game or borrowed from football. The most memorable were the success of the Englishman Tommy Fleetwood, who, together with Francesco Molinari, won all match meetings.

READ  AGR President Viktor Khristenko: "We honestly fulfill all the instructions, although the history of doping is new for us"

Each hole had huge screens over ten meters in size, and people could watch the game on other holes from their place.

In order to have a good view, it was necessary to arrive in advance, since the struggle for half a meter of space was serious. The audience stood to death and did not hesitate in expressions to defend the conquered space. Neither the presence of accreditations, nor anything else gave preferences.

The Lebensraum was divided into two categories – “inside” the 25,000 meters of blue ropes surrounding the field and beyond.

Being inside was especially valuable, as there was an opportunity to be inside what was happening and become a direct participant in the action.

The players were followed not only by the coaching staff, organizers and guards, but also by girlfriends and wives who tried to be dressed in the colors of the team – light trousers or skirts, aviator glasses and cozy hats with the symbols of the national teams.

After the practice rounds, four players from each team appeared in front of reporters to answer all possible questions. The captains gave comments every day.

The media center was a huge tent, about 10 meters high and accommodating 370 journalists. Inside, places were equipped with power outlets, internet access, coffee machines, water, beer and wine.

Access to information was instant. The staff of the center fulfilled all reasonable requests by sending press releases or posting them on special stands, providing golf cart and other necessary attributes of work on the golf course.

READ  In 2023, the Solheim Cup and Ryder Cup will be held in succession for the first time

The complex was crowned with a clear screen 25 meters wide, on which the score was shown and the matches were broadcast. Everything was organized so conveniently that if you wanted you could stay inside the center, while receiving all the necessary information about the tournament.

Golfers, visitors and journalists started their day very early. By eight in the morning the media center was almost full, and preparations for the rounds were in full swing on the Range.

The putting green was located next to the area from where the players entered the club grounds. After practicing a short game, the golfers went to the range to continue their warm-up.

The appearance of Tiger Woods has always caused a stir. He moved slowly around the training area and did very few punches, working more for the audience than preparing for the game.

The rest of the players, on the contrary, honed their blow in the company of coaches and vice captains.

Rory McIlroy occupied the quietest and farthest place from the audience and was one of the few who came to warm-up an hour before entering the field, ending it on the chipping green a couple of meters from the range.

After the end of the training, the flights went to the field to the loud applause of the fans.

The loudest, but not the most numerous, fans were from the US national team.

You could buy team insignia right here in a huge store that sold products intended for both teams. Caps, jackets, polos, club covers, children’s clothing were in great demand, and on the final day of the tournament it was very problematic to get something of the right size.

Our editorial team acquired a flag for the hole so that golfers could leave their autograph on it. We were lucky and we collected the entire collection of murals with the exception of the main one … Tiger Woods.

(Backstage of the Trophy presentation, Tiger Woods on the Range, a huge souvenir shop, fans’ emotions and other interesting moments of the Ryder Cup)

The Ryder Cup was held for the second time in continental Europe. According to Tour Manager Keith Pelly, the choice was not accidental and associated with new approaches to popularizing golf in Europe.

The next tournament in Europe will take place in Italy in 2022. Whether it will attract the same attention of young people and spectators as this year is still unknown, but the chances of success are very high.

Golfmir.ru became the first edition from Russia to be accredited for the tournament. The Russian Golf Association supported us by organizing the logistics part of the trip, and we would like to express our deep gratitude to the AGR management for their help.