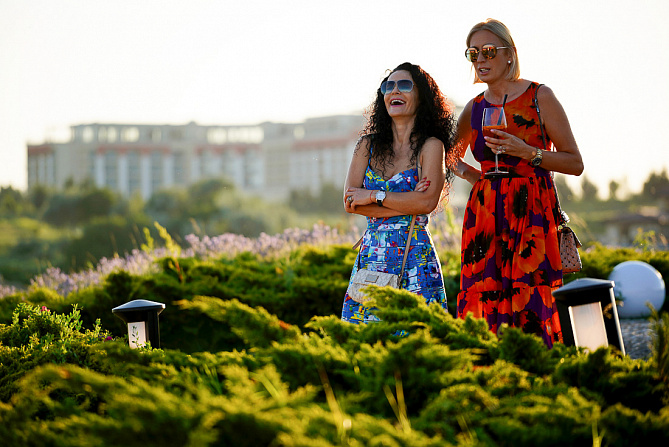 When we say “golf in Bulgaria” we mean a region 60 kilometers north of Varna on the Black Sea coast called Cape Kaliakra.

The golf courses on the northeastern Black Sea coast of Bulgaria are popular with golfers and also invariably attract prestigious international golf tournaments.

In 2018, Black Sea Rama and Lighthouse Golf celebrate their tenth birthday. During this time, golf courses have acquired maximum playing characteristics, and resorts and tournament organizers have acquired traditions, one of which is the Cape Kaliakra Open tournament.

In 2014, Doctor of Physical and Mathematical Sciences, professor and a big fan of golf, Sard Sardarov, took the initiative to create a major international tournament for amateurs, called Cape Kaliakra Open.

In 2016, in honor of the 70th anniversary of Mr. Sardarov, as part of the Cape Kaliakra Open golf tournament, the Sardarov Cup was organized, where the Balkans team and the World team compete for the title of the strongest.

Supported by the Kaliakra Golf Foundation and the Bulgarian Golf Association, the competition takes place on three of the best courses in the region and invariably attracts the attention of a large number of foreign golfers.

“In 2011, my family spent the summer in Bulgaria and fell in love with this country. In 2013 we became residents of the Lighthouse Golf & Spa Resort.

To be honest, rarely where on Earth are three magnificent and completely different golf courses combined with the amazing beauty of the sea.

I wanted to show this beauty to other golf lovers and arrange a holiday for them and for myself. This is how the idea of ​​the Cape Kaliakra Open tournament was born, which was supported by golf clubs and personally by the CEO and founder of Lighthouse Golf, Georgy Chuklev.

We created a non-profit foundation Fondacia Kaliakra Golf with the aim of raising funds for an idea and it went off.

The slogan of the tournament: “No Age, No Limits!”

Now the golf tournament is a successful project with continuous development. The number of participants ranges from 120 to 180 golfers representing up to 23 countries of the world. 40% of people return to the tournament every year.

Join us! We are friendly and fun! ”Sard Sardarov says.

This year, the tournament was held from 21 to 24 June with the participation of 120 players from 15 countries. Depending on the handicap group, the participants competed for the trophy in two formats – Stroke Play and Stableford.

The best in the first handicap group was the representative of Romania Darius Podobea with a score of 226 strokes in three playing days. Local golfer Todor Kostov became the first in the second group with 97 points. In the third handicap group, the podium was completely given to the fair sex, where the most successful was Veronika Kalabzova from the Czech Republic (95 points).

READ  "Deschambeau is simply destroying golf." How to play against truckers?

The past stage will be remembered for the unexpected hole in one on the 6th par3 “signature hole”, located on the edge of the steep cliff of the Thracian Cliffs golf course.

Georgy Krastev, who made the blow, received generous prizes from BMW and went down in history not only of the tournament, but also of the club.

The tournament ended with a grand award ceremony and prizes from partners: the watch brand Omega, IT giant Apple, Garmin, Turkish Airlines and BMW, as well as the Alain Dusasse restaurant.