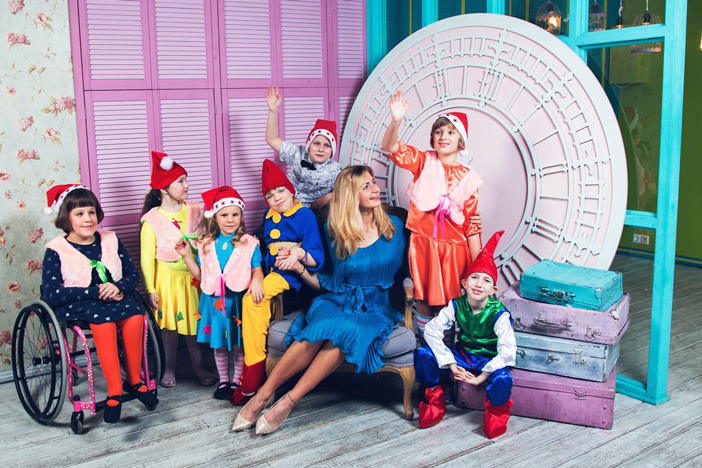 Member of the Russian women’s golf team, current player of the University of Northern Arizona, Champion of Russia, four-time medalist of the Championship of Russia

This winter, Sofia Anokhina, the Southwest American Golf League Player of the Year 2016-2017 Player of the Year for the University of Arizona golf team, became the trustee of the Overcome-ka charitable foundation to support people with disabilities with musculoskeletal disorders.

During her school years, Sophia was fond of ballroom dancing, for the last three years she has been living in the USA, receiving an MBA. The golfer is 21 years old and has already started to engage in charity work, an occupation inherent in a much older audience.

GM: Sophia, tell us about the Overcome Charitable Foundation.

S.A .: Get Over It is a unique project, one of a kind in Russia.

It is unique primarily in that it is not just a charitable foundation that transfers donations to children with disabilities and institutions for their treatment and rehabilitation.

This is a dance studio that makes dreams come true and successfully expands the range of opportunities for children with problems of the musculoskeletal system. This is a place where each participant tells his own unique story through the most beautiful language that does not know state boundaries – dance.

Children help each other to learn in themselves something new, still completely unidentified, unspoken. It can be movements that need to be felt to your fingertips, or feelings that open doors to the farthest corners of the soul. Of course, the transfer of these feelings through dance is under the sensitive, at the same time precise and demanding control of the teachers – choreographers. They teach pure children’s hearts to discover an unknown depth in themselves, which opens up and sounds like a symphony on stage.

Self-development and self-knowledge are an integral part of every lesson, which includes elements of improvisation based on personal relationships with the outside world, translated into body language.

“Overcome” allows everyone to find and lovingly give the world a piece of themselves, overcome stereotyped thinking and “erase” imposed prejudices and fears around themselves.

GM: How did you find out about the project?

S.A .: I learned about it through a fairly narrow golf circle.

In September 2017, in my interview to the Russian edition, I shared with readers my values ​​and vision of the world beyond golf courses, one of the Members of the Board of Founders of the Fund, after reading my lines, contacted me to find out potential interest in supporting the Charitable Foundation “Overcome” and further teamwork.

After I myself plunged into the atmosphere of the team, their work and values ​​- I had no doubt that this project is exactly what I am ready to devote all my free time from sports training.

GM: What are your responsibilities as a trustee?

S.A .: My responsibilities are quite creative, like the “Overcome-ki” team itself.

In addition to the fact that I became a full-fledged member of the troupe for a while, I am engaged in popularizing the project, finding and attracting new people, caring like-minded people.

I would also like to tell and show how far beyond the boundaries of an ordinary charitable organization “Overcome-ka” works, this project allows children with disabilities to understand themselves and share their discoveries with the audience, taking part in numerous festivals and concerts, speaking in front of thousands of audiences.

GM: What have you already done and what are your plans for the future?

S.A .: I managed to get to know the project closely enough, I attended several trainings, I immediately wanted to speak again in a language that everyone understands – the language of dance. After all, I once “spoke” on it for 7 years!

READ  "Golf is an addiction that has become a lifestyle." Yulia Kirilenko has set a record among Golfmir.ru readers by playing 351 golf courses

I took part in a photo session, played with the children in class, helped them create the images of the gnomes in the “Snow White and the 7 Dwarfs” issue. I tried to support and inspire them.

In addition, I am constantly in touch with the project, working on its popularization – in my blogs and in live communication with people.

Someday I plan to hold and take part in a charity golf tournament dedicated to this Fund.

GM: Golf and philanthropy – how do the two go together? Interested in your opinion as an athlete.

S.A .: I believe that charity is primarily culture, part of the way of life of a civilized person.

In countries where golf culture exists and is well developed, there is also a well developed culture of giving. Both of these cultures are closely and harmoniously related, work together and very efficiently.

Therefore, in my opinion, the fusion of charity and golf – beautiful and beautiful – is a stylistically impeccable combination, and it should flourish. After all, sport adorns this world, and charity helps all people to see it colorful and beautiful.

GM: How can Golfmir.ru readers help the foundation?

S.A .: Tell your friends about him, get to know him on official resources, and also provide financial support for the details indicated on the website: preodoleyka.org
The Overcome-ka Foundation also has many excellent media resources where you can track news, work process, interviews, future plans and reports on past events: www.facebook.com/preodoleyka.official, www.instagram.com/preodoleyka ,
READ  Where to play golf?
By Caitlin Joseph
Recent articles Tags: Anokhina boundaries Charitable childrens Foundation hearts Overcomeka Sofia symphony