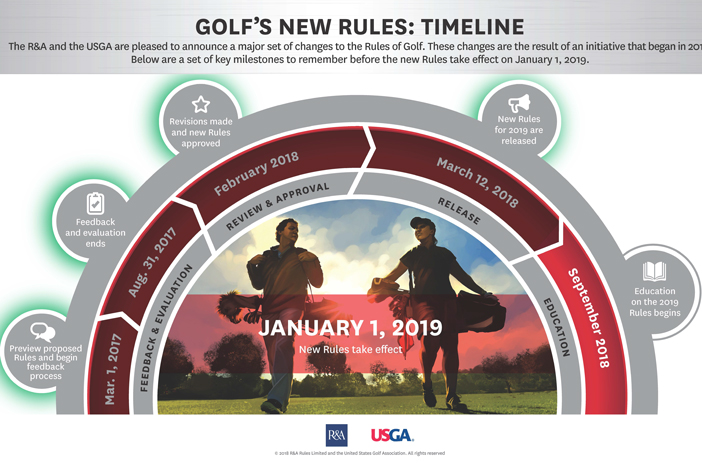 The process of changing the Rules began in 2012. The main goal is to simplify some of the rules so that they become more accessible to players and spectators, as well as in order to attract more new audiences to golf.

We present our readers with a unique opportunity to read and download the new Golf Rules and materials:

(About the rules in brief)

– the player must throw in the ball from knee height (in the proposed version of the 2017 Rules, a throw-in from any height was allowed, the existing Rules only allow this to be done from shoulder height using the right or left hand extended parallel to the ground).

It is believed that this change will reduce the element of randomness in exactly where the ball will fall and bounce, since the distance to the ground will be less.

Measurements in the “Relief” zone:

– in order to determine where the throw-in will take place, the player must take the longest club in his “bag” (but not the putter), and measure the length of one or two clubs from the boundary of the obstacle (depending on the situation).

Cancellation of the penalty for double touching the ball on impact:

– a player will not receive a penalty point if he unintentionally touches the ball twice in one hit. This can happen, for example, if a golfer kicks the ball out of a banker or tall grass and touches the ball several times in the course of one movement.

In the existing Rules and the proposed changes to the 2017 sample, a golfer for a double touch is penalized with one stroke.

New rule for balls lost or out of bounds:

– The new Local Rule allows golfers to throw in the ball with a two-point penalty where it is believed to have been lost (in the event that it cannot be found) or along the line of impact in the event that the ball went out of bounds. We are talking about mid-level tournaments, these changes will not be applied for professionals.

By doing so, R&A and the USGA expect to increase the speed of the game, since golfers, in the event of an inaccurate hit, do not have to go back and fire again from the same point.

“We are proud to present the New Golf Rules. They are compiled based on the amendments and opinions of a large number of people, including golfers, rule experts and officials from around the world. We believe the new Rules are more suitable for golfers and easier to understand for all golfers, ”Rickman said.

The following amendments were proposed in 2017 and will also be included in the new set of Rules.

Cancellation or reduction of ball-off penalties:

– the penalty for accidentally shifting the ball on the putting green or while searching for the ball is canceled;

– the player is also not responsible for the movement of the ball, unless it is known for certain that it was the player who moved the ball.

Relaxation of the rules governing the playing of the putting green:

– the penalty for hitting an unattended flag in the hole after hitting from the putting green is canceled;

– players can play putts without having to maintain the flag or remove it from the glass of the hole;

– the penalty for simply touching the putt line is canceled.

Relaxation of the rules for “penalty areas” (these areas are now called “water hazards”):

– the possibility of using red “penalty areas” is expanding, from which lateral relief is allowed;

– The penalty for shifting free interference in “penalty areas” and the penalty for touching in these areas of land or water are canceled.

Relaxation of the rules for bunkers:

– Added an option to relieve in the case of an unplayable ball in the bunker – it will now be possible to play the ball from outside the bunker with the addition of two free kicks.

READ  Natalya Guseva: "In 2020, my goal is to get into the top 50 of the world amateur golf rating and qualify for the Junior Ryder Cup"

– it will be considered that the player as objectively as possible made the determination of the place, point, line of the area or distance, even if the subsequent video analysis shows that these actions were incorrect;

– the procedure for “declaring” when the ball is picked up to identify or determine the suitability of the ball for play is canceled.

Maintaining the pace of the game:

– the time to find a lost ball is reduced (from five to three minutes);

– it is strongly recommended to play on readiness in the format of play at the expense of strokes;

– it is recommended to spend no more than 40 seconds per blow.