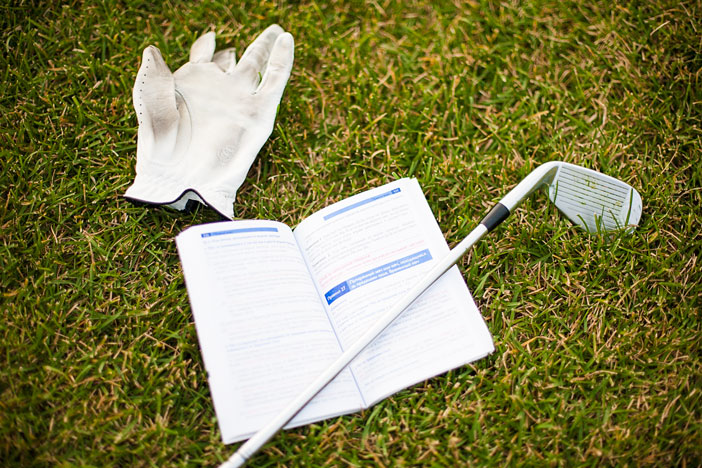 Fast play is the leitmotif of the new rules of golf. For example, in all game formats (match meeting, stroke play, etc.), it is proposed not to wait for your turn, but to play when ready (ready golf).

The rules instruct the organizers of the competition to establish a pace of play policy that stipulates the timing of the round and hole.

At the same time, the rules recommend spending no more than 40 seconds or even less on the execution of the blow.

2. You can hit the putting green without removing the flag from the hole (Rule 13.2)…

And at the same time, do not be afraid of the ball hitting the flagpole. Even if you hit, you will not be punished with a fine. This is one of the most revolutionary rule changes ever, designed to speed up the pace of the game.

Observations show that in the absence of a caddy, manipulating the flag takes a long time.

By itself, a flag left in the hole can help the ball roll into the hole, but it can also interfere. This is a matter of chance.

The situation when you could not find your ball, and the temporary ball was not played was unpleasant for everyone: you had to go back, sometimes a couple of hundred meters, and your bandmates languished in anticipation, wasting time and the rhythm of the game.

The new Rules offer a way out of this predicament. Now, having added yourself two penalty hits, you can not return to the place of the previous hit, but throw in and play the ball near the place where the ball is lost or lies out of touch.

4. You can clear loose obstructions and touch the sand in the silo. (Rule 12.2).

If your ball is in the bunker, then unintentionally touching the sand with your hand and club is not penalized.

For example, you can lean on your club waiting for a hit, or hit the sand in your hearts after a failed attempt to knock the ball out of the bunker.

You can also remove loose obstacles in the bunker without fear of a fine.

But unlike the penalty areas for bunkers, some restrictions remain. You will receive a major penalty (a new concept in the Rules – two penalty hits) if you deliberately touch the sand in any way to determine its condition, if you touch the sand during a practice swing or when swinging for a hit, and if you place the stick on the sand in front of or behind the ball before hitting.

5. Moving the ball while searching for it is no longer penalized (Rule 7.4).

Now, if you hammered your ball into the rough or into the penalty area, to find it, you can safely push the grass and sand with a stick or foot, lift (and even break within reasonable limits) branches, touch the water and you will not face a fine.

The main thing is that if during the search you moved the ball, then be sure to return it to the same place where it was lying, and if this place is unknown, then determine it approximately.

6. Almost all damage to the putting green can be repaired (Rule 13.1c).

It is forbidden to close only aeration holes, restore worn-out lawn and smooth out natural defects of the putting green.

7. If your ball accidentally hits someone or something, there is no penalty (Rule 11.1).

If you knocked the ball out of the forest and the ball, hitting a tree, bounced and hit you or your equipment, then you do not receive a penalty and the ball must be played as it lies.

Likewise, if you accidentally hit your bag that you left on the fairway, then there is no penalty and you continue to play from where your ball stopped. True, there is an exception to this Rule.

If your ball, after hitting from the green, hits a ball that is on the green, then you still suffer a two-hit penalty, which is now called the main penalty.

8. When the ball is thrown into a referee area, it must stop in that area and must be played from that area (Rule 14.3).

When you use a Relief under any Rule, you must throw in the ball as before. But if before you had to remember nine different scenarios in which the ball had to be thrown again, now everything is simple.

In this case, if the ball, after hitting the ground and until the moment it stops, touches someone or something, then there is no need to throw in the ball again.

9. The knee is the old shoulder.

It should be remembered that according to the new Rules, the ball must be thrown from the knee height of a standing player. Not lower and not higher.

It remains to remind that the reef area is a sector with a radius of one or two club lengths, in which the player must throw the ball.

10. Touching loose obstacles or the ground in the penalty area is not penalized (Law 17).

If your ball hits the penalty area (as the water obstacle is now called), then you do not have to worry about how not to touch the ground and water in it with your club and how not to move the dried blade of grass lying next to the ball.

You can focus all your attention on the execution of the strike. In preparation for it, you can remove loose obstacles that are interfering with you, do a training swing, touching the ground or water with the club and place the club on the ground before hitting.

Under the old rules, the only disciplinary measure against negligent players was disqualification for gross violation of etiquette.

The new Rules allow competition organizers to establish their own Code of Conduct and impose penalties for inappropriate behavior that are less severe than disqualification. For example one hit penalty or main penalty.

For this Code to be valid, it must be formalized as a Local Tournament Rule.