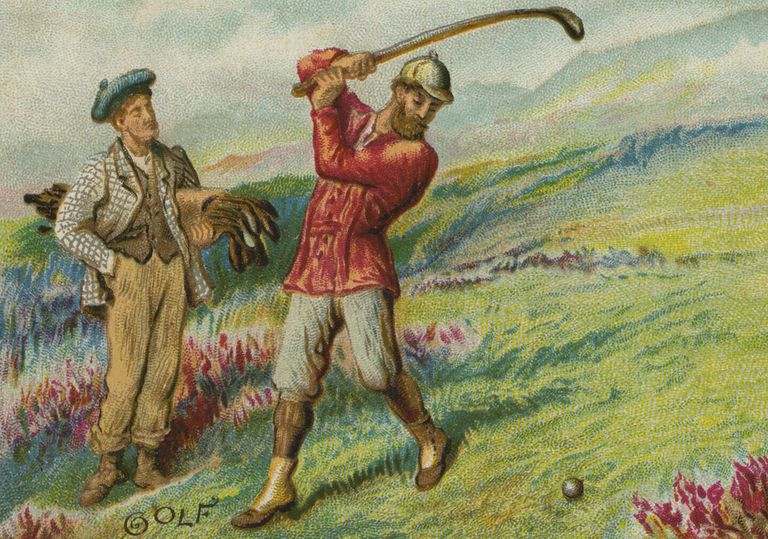 Now in the world no one will say when the game of golf appeared. There is no exact information about the appearance of this game. According to some assumptions, its founders were medieval shepherds who, while passing the time while grazing sheep, began to hit the stones with their staffs. According to another version, golf evolved from an ancient Flemish game called choie, which was already known in England from the middle of the 14th century.

The most likely predecessor to golf was the Danish game kolf, first mentioned at the end of the 13th century and depicted in many Danish landscapes of the time. The “golfers” played on rough terrain with a stick and a ball, but they did not aim at a hole, but at a certain mark on the ground. Most often at the doors of buildings.

However, the game really developed in Scotland. The areas with ups and downs became so popular that in 1457 Jacob II banned golf, as well as football, in an act of parliament, as they prevented archers from practicing.

Skill with bow and arrow played a large role in keeping the British out of Scotland. The game remained exclusively Scottish (possibly with its Danish counterpart koII) until James VI of Scots became king of England. Together with him, the game came to the south of the island. At Black Heath – now the Royal Blackheath in South London – the Scottish nobles have equipped a seven-hole course for their favorite game.

The first fields in Scotland had little in common with today’s fields. The game was played on public land, where it was quieter, with overcoming natural barriers and obstacles. For the game, not only walls and ditches were used, the players often occupied places designated for horse riding, cricket, picnics, etc.

Golf caddies in the early part of this century – golfers used a lot fewer golf clubs and caddies had to clear the way ahead and also watch the balls fly.

The fields were natural, the grass in the fields was “cut” only by sheep and rabbits. There were no formal tees; the players took their first shot a meter from the previous hole. Of course, the rules were formed over the years, golf clubs were opened. The oldest of these, the Honorable Company of Edinburgh Golfers, now based in Mirfield, was founded in 1744, and the Society of St Andrews’ Goffers was formed 10 years later.

Under the direction of St. Andrew’s Club, the basic rules of the game and the number of holes on the course were developed. Until 1764, there were 22 holes on the St. Andrew’s Club course, other courses had from 6 to 25 holes. In 1858, an 18-hole course became common. This rule has been preserved to this day. The game expanded and developed rapidly, and the first professional players appeared in the mid-1800s.

Alan Robertson, the first great professional golfer, died in 1858. His death is believed to have sparked the first professional championship at Prestwick in 1860, where a new national champion was to be determined.
This championship was for amateurs in 1861 and became the first open (Oren) championship. In 1863 the attractive prize to the winner was only £ 10. In 1861, the winner was Tom Morris the Elder (“Old Tom Morris”), who had success in the next three competitions.

In 1868, the winner of the Open was his teenage son “Young Tom Morris”, who achieved success three times in a row. As per the rules, he would receive the existing prize, then skip a year when the Open was not held pending a new trophy. He continued to win and set a record – four Opens in a row.

Since then, the game has evolved and gradually turned into the one that we now know. At the time Tom Morris won £ 10 for the Open Championship, it was hard to imagine golfers would ever make millions. In 1987 Ian Woosnam achieved this by receiving $ 1 million for winning a tournament in South Africa.