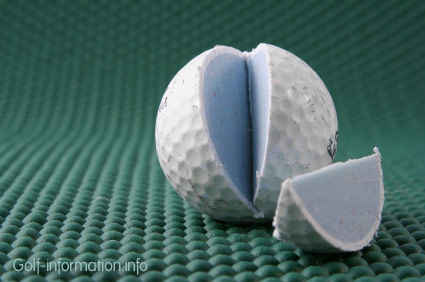 Surely the pioneers of golf would be skeptical of the modern-day grooved ball. However, just as the courses, clubs and rules of golf have improved over the years, the ball has changed beyond recognition in the past.

Throughout the history of the development of the game of golf, there were 3 types of balls: 1) Feather ball 2) Gutta-percha ball 3) Rubber-coated ball. The first type of ball was used long enough until the middle of the 19th century, it was used for almost 400 years. The second and third types have been used in the last 150 years of golf evolution.

The feather ball dominated the game for so long not so much because of some of its specific merits, but because there was no other alternative. This ball consisted of a spherical outer cover stuffed with more feathers, which were boiled in order to become softer and more compact. A certain number of feathers were used in the manufacture, making up a “full cylinder”, that is, about two liters. The hole through which the feathers fit into the ball was subsequently sewn up, after which the ball was shaped into a ball.

The process of making the ball was long and expensive, since an experienced craftsman could only make no more than 3-4 balls per day. The ball resulting from such an operation had a number of disadvantages. The ball turned out to be uneven, and its flight was random. When it rained, the ball absorbed moisture into itself, which affected its weight, and the game became quite difficult. As a result of getting wet, the seams rotted, as a result of which the ball could break when playing on a rocky surface.

Thus, it is obvious that a feather ball was not ideal for playing golf at all. In 1850 they found an excellent replacement for the existing ball. The ball was made from a resinous excretion from Malaysia, which was named gutta-percha… Golfers all over the world were certainly delighted with the new invention.

The gutta-percha could be softened in warm water, shaped into a ball — first by hand and later in steel molds — and then allowed to cure at a lower temperature. The result was a perfect ball that rolled straight for the first time in golf history.

These balls were cheap and quick to make. So while these balls were not as pleasant to hit as the feathers, they certainly represented a significant improvement. Occasionally these balls shattered, but they could be cast again. However, a problem arose from the very beginning. Smooth balls did not want to fly a significant distance. This immediately irritated the so-called gutti users and raised hope among the feather ball makers who were worried about the innovation.

During games, it was noticed that when the ball appeared dents, its technical characteristics improved and it flew better.

At the turn of the century, Coburn Haskell introduced an elastic, wrapped ball with a soft core, from which the modern version of the ball evolved. First wrapped in gutta-percha, this ball was more springy and easier to control. However, despite these qualities, such a ball was treated with suspicion and there was serious talk about its ban.

This all changed during a training round at the 1902 British Open, played between pro Alexander Hurd and up-and-coming amateur John Ball. Hurd should have won easily, but found himself constantly outplaying him, both on the fairway and on the green. John Ball used one of the new ball variants. Then he suggested that Alexander try to play with a new ball. Ultimately, Hurd was able to win the championship. After this event, the ball became very popular among golfers around the world.

Despite the debate over weight and size that began after World War I, it was decided in 1968 that only the American 4.27cm standard would be used in all PGA competitions.

Modern technology continues to improve the golf ball, and as a result of innovation, the rolling and flight of the ball is becoming more stable and stable. Golf ball varieties are emerging: 1) Hard ball 2) Semi-hard ball. In addition, the pattern and number of grooves were changed, as well as compression variations were introduced, selected for individual players depending on conditions.

Recommended for watching the video “How Golf Balls Are Made”.

HOW DO GOLF BALLS

In the meantime, there is no need to worry about it. ”