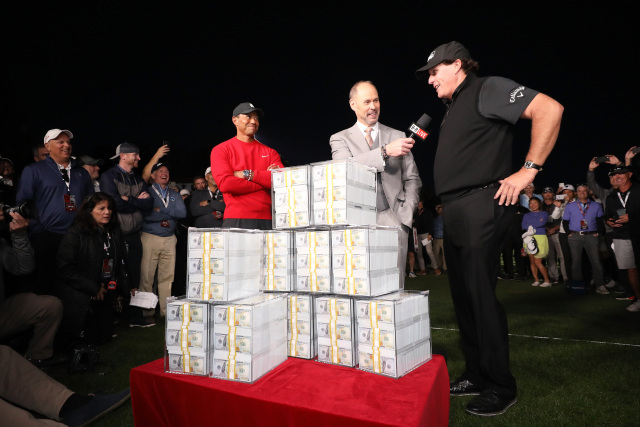 Tiger Woods and Phil Mickelson. Photo: Getty Images
This week, Phil Mickelson opted to play on the Veteran Tour and withdrew from the CJ Cup, where 78 PGA Tour representatives were competing for $ 9.5 million in prize money. Journalists asked why Lefty did not want to play in a tournament where all players are guaranteed high payouts, and Phil answered in his usual manner.

“I think I’m better off playing here this time,” Mickelson said. – After my last performance at Shadow Creek Golf Club, I will be a little disappointed, even if I beat all 78 opponents. Last time I won so much that now I just don’t see the point in fighting for that amount. “

Thus, Mickelson subtly reminded of his victory over Tiger Woods during the first Match. Shadow Creek Golf Club became the arena of that confrontation, and then Phil beat Tiger and replenished his account with nine million dollars. However, Lefty admitted that he has other motives to play in the PGA Tour Champions.

“I think this Tour is good for me, and I realized this while playing at the Ozark Golf Club,” explained Phil, who won his debut among golfers in his fifties. – Here it’s easier for me to relax a little and work out some aspects of my game. It is very difficult to compete in the main Tour. I’ve had some good performances, but it’s hard to get involved in the fight all the time if you’re not capable of hitting the drives incredibly far and accurately.

As far as the range is concerned, I’m fine, but the accuracy is lame. In the same Tour, conditions are a little more forgiving, the rough is not so high, the fairways are not so narrow. It is quite difficult to perform here, but not as hard as in the main Tour. Therefore, here I have the opportunity to fight for titles and work on my game at the same time. “