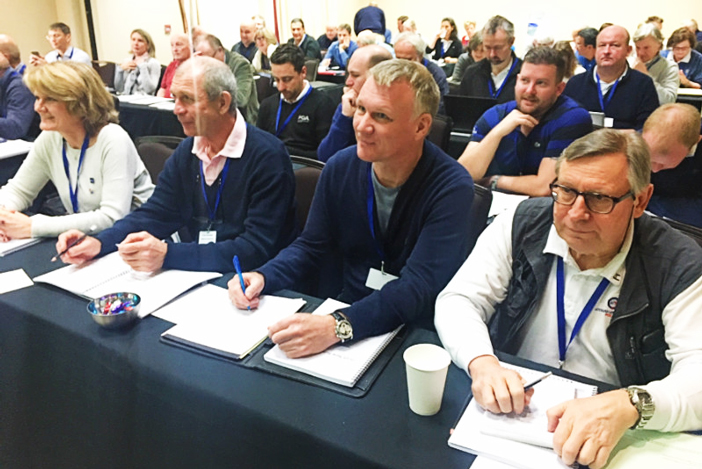 In terms of content, the new Rules of Golf will have new terms (eg, instead of “water hazards”, there will be “penalty areas”). Golfers in 2019 will have to face many innovations, for example, it will be allowed to roll the ball into the hole without removing the flag from it, penalties will be canceled for the player accidentally shifting the ball on the putting green and during his search, as well as for the player accidentally hitting the own equipment.

It is possible that the procedure for throwing in the ball will change, it will be allowed to throw in the ball from a lower height than prescribed by the current rules.

In order to increase the pace of the game, the allowed time for finding the ball will be reduced to three minutes, and it is also recommended to spend no more than 40 seconds on making a hit and, subject to certain conditions, to execute a hit out of turn, i.e. “when ready”.

In this regard, the R&A Organization of Golf Rules, held a seminar “Train the Teachers” in St. Andrews on February 7-9, to which national experts in teaching golf rules were invited from different countries. The aim of the seminar is to educate those who, in their own countries, will teach the new rules to golfers and referees. The seminar was attended by 92 specialists from 34 countries of Europe and Africa (separate seminars are planned for other continents).

The delegation of the Russian Golf Association included Nikolai Remizov, Chairman of the Competition Rules and Refereeing Committee, Vitaly Kostenov, an experienced referee and mentor who scored a record number of tournaments in the 2017 season, and Igor Chudenkov, a member of the editorial team for the translation of the new rules into Russian …

During the seminar, experienced referees and sports organizers from different countries were able to communicate with those who “write the rules” and understand the logic that guided them.

On the other hand, the listeners pointed out to the authors of the rules a large number of minor flaws, subtleties and nuances that they noticed in the draft of the new rules. Thus, the seminar was useful not only for the listeners, but also for the speakers.

It is planned that an interim draft of the translation of the new rules into Russian will be prepared by this summer and (as in the case of the previous version) will be presented for some time on the AGR website to everyone for comments and suggestions.

The final version is expected to be prepared by the end of 2018.

Training workshops are also planned for the end of 2018 as the entire 2018 sports season must be played according to the current “old” rules of golf, and it is undesirable to create confusion in the minds of players and referees.